Virtuozzo Webinar: Cloud Security: Should You Be Worried?

Presentation FOSDEM.org - OpenVZ containers, how they work and look

Webinar: Getting to Virtuozzo 7 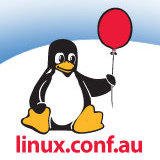