OpenVZ is an container-based virtualization solution for Linux. OpenVZ creates multiple isolated partitions or containers (CTs) on a single physical server to utilize hardware, software, data center and management effort with maximum efficiency. Each CT performs and executes exactly like a stand-alone server for its users and applications as it can be rebooted independently and has its own root access, users, IP addresses, memory, processes, files, applications, system libraries, and configuration files. Light overhead and efficient design of OpenVZ makes it the right virtualization choice for production servers with live applications and real-life data.

The basic OpenVZ container capabilities are:

The OpenVZ containers virtualization model is streamlined for the best performance, management, and efficiency, maximizing the resource utilization.

If you administer a number of Linux dedicated servers within an enterprise, each of which runs a specific service, you can use OpenVZ to consolidate all these servers onto a single computer without losing a bit of valuable information and without compromising performance. A container behave just like an isolated stand-alone server:

In fact, hundreds of servers may be grouped together in this way. Besides the evident advantages of such consolidation (increased facility of administration and the like), there are some you might not even have thought of, say, cutting down electricity bills by many times!

OpenVZ proves invaluable for IT educational institutions that can now provide every student with a personal Linux server, which can be monitored and managed remotely. Software development companies may use Containers for testing purposes and the like.

Thus, OpenVZ can be efficiently applied in a wide range of areas: web hosting, enterprise server consolidation, software development and testing, user training, and so on.

The concept of OpenVZ Containers is distinct from the concept of traditional virtual machines in the respect that Containers always run the same OS kernel as the host system (such as Linux on Linux, Windows on Windows, etc.). This single-kernel implementation technology allows to run Containers with a near-zero overhead. Thus, OpenVZ offers an order of magnitude higher efficiency and manageability than traditional virtualization technologies. OS Virtualization

The OpenVZ network virtualization layer is designed to isolate Containers from each other and from the physical network:

An OS template in OpenVZ is basically a set of packages from some Linux distribution used to populate one or more Containers. With OpenVZ, different distributions can co-exist on the same hardware box, so multiple OS templates are available. An OS template consists of system programs, libraries, and scripts needed to boot up and run the system (Container), as well as some very basic applications and utilities. Applications like a compiler and an SQL server are usually not included into an OS template. For detailed information on OpenVZ templates, see the Understanding Templates section.

In this section we will try to let you form a more or less precise idea of the way the OpenVZ software operates on your computer. Please see the figure. 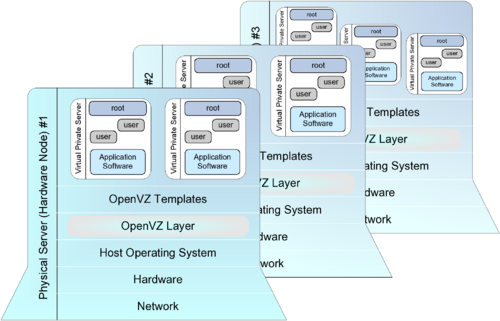 This figure presumes that you have a number of physical servers united into a network. In fact, you may have only one dedicated server to effectively use the OpenVZ software for the needs of your network. If you have more than one OpenVZ-based physical server, each one of the servers will have a similar architecture. In OpenVZ terminology, such servers are called Hardware Nodes (or just Nodes), because they represent hardware units within a network.

OpenVZ is installed on an already installed Linux system configured in a certain way. For example, such customized configuration shall include the creation of a /vz partition, which is the basic partition for hosting Containers and which must be way larger than the root partition. This and similar configuration issues are most easily resolved during the Linux installation on the Hardware Node. Detailed instructions on installing Linux (called Host Operating System in the picture above) on the Hardware Node are provided in the Installation Guide.

OpenVZ is installed in such a way that you will be able to boot your computer either with OpenVZ support or without it. This support is usually presented as "openvz" in your boot loader menu and shown as OpenVZ Layer in the figure above.

However, at this point you are not yet able to create Containers. A Container is functionally identical to an isolated standalone server, having its own IP addresses, processes, files, users, its own configuration files, its own applications, system libraries, and so on. Containers share the same Hardware Node and the same OS kernel. However, they are isolated from each other. A Container is a kind of 'sandbox' for processes and users.

Different Containers can run different versions of Linux (for example, SUSE10 or Fedora 8 or Gentoo and many others). Each Container can run its own version of Linux. In this case we say that a Container is based on a certain OS template. OS templates are software packages available for download or created by you. Before you are able to create a Container, you should install the corresponding OS template. This is displayed as OpenVZ Templates in the scheme above.

After you have installed at least one OS template, you can create any number of Containers with the help of standard OpenVZ utilities, configure their network and/or other settings, and work with these Containers as with fully functional Linux servers.

The OpenVZ software allows you to flexibly configure various settings for the OpenVZ system in general as well as for each and every Container. Among these settings are disk and user quota, network parameters, default file locations and configuration sample files, and others.

OpenVZ is free software. It consists of the OpenVZ kernel and user-level tools, which are licensed by means of two different open source licenses.

In order to increase Hardware Node availability, we suggest you follow the recommendations below: