OpenVZ is an open source virtualization technology for Linux that enables the partitioning of a single physical Linux machine into multiple smaller independent units called containers.

A namespace is an abstract environment created to hold a logical grouping of unique identifiers or symbols (i.e., names). An identifier defined in a namespace is associated with that namespace. The same identifier can be independently defined in multiple namespaces. An example of namespace is a directory on a file system. This allows two files with the same name to be stored on the same device as long as they are stored in different directories.

For OpenVZ, Linux kernel namespaces are used as containers building blocks. As an example of namespace usage, let's take a look at chroot. 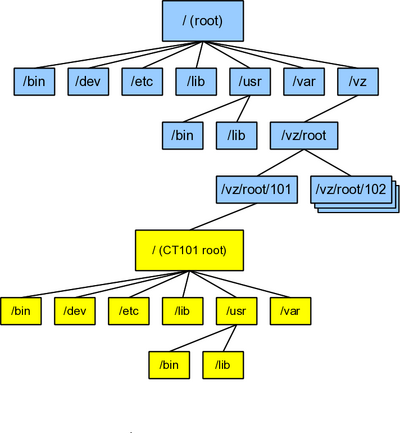 Traditional UNIX chroot() system call is used to change the root of the file system of a calling process to a particular directory. That way it limits the scope of file system for the process, so it can only see and access a limited sub tree of files and directories.

Chroot is still used for application isolation (although, unlike container, it does not provide full isolation — an application can escape from chroot under certain circumstances).

Chroot is also used by containers, so a container filesystem is just a directory on the host. Consequences are:

OpenVZ builds on a chroot idea and expands it to everything else that applications have. In other words, every API that kernel provides to applications is “namespaced”, making sure every container have its own isolated subset of a resource. Examples include:

Note that memory and CPU need not be namespaced: existing virtual memory and multitask mechanisms address this. 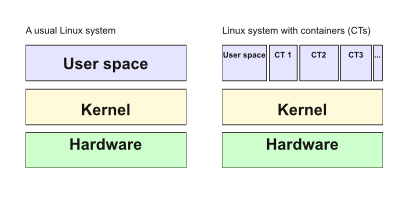 To put it simply, a container is a sum of all its namespaces. Therefore, there is only one single OS kernel running, on top of it there are multiple isolated containers, sharing that single kernel.

Single kernel approach is much more light-weight than traditional VM-style virtualization (for more differences between CT and VM, see Containers vs VMs).

The consequences of having only one kernel are:

See more at #Performance and density below.

Due to a single kernel model used, there is one single entity which controls all of the resources: the kernel. All the containers share the same set of resources: CPU, memory, disk and network. All these resources needs to be controlled on a per-container basis, for the containers to not step on each other's toes.

All such resources are accounted for and controlled by the kernel.

It is important to understand that resources are not pre-allocated, they are just limited. That means:

Kernel CPU scheduler is modified to be containers-aware. When it's time for a context switch, scheduler selects a process to give a CPU time slice to. A traditional scheduler just chooses one among all the runnable tasks in the system. OpenVZ scheduler implements two-level schema: it chooses a container first, then it chooses a task inside the container. That way, all the containers get a fair share of CPU resources (with no regard to number of processes inside each container).

The following CPU scheduler settings are available per container:

All the containers share the same physical memory and swap space, and other similar resources like a page cache. All that memory is managed by a single kernel, thus making memory distribution model very elastic — if memory is not used by one container, it can be used by another.

Two major memory resource control parameters that are controlled per container are RAM and swap. If container is off its limit in terms of RAM, kernel tries to free some, by either shrinking the page cache or by swapping out. This reclamation mechanism is the same as used by a non-containerized kernel, the only difference is swap out is "virtual", in a sense that kernel does not write physical pages to the disk, but just removes those from container context (in order to avoid unnecessary I/O), while slowing down a container (to emulate the effect of real swap out). Next, if a situation of global (not per-container) memory shortage happens, such pages are really swapped out into a swap file on disk.

The above memory control mechanism is efficient, easy to use and comprehend by an administrator, and overall very effective.

In addition, there is an ability to fine-grain control some of the memory-related resources, such as size of IPC shared memory mappings, network buffers, number of processes etc, overall about 20 parameters called User Beancounters.

Checkpointing is an OpenVZ kernel feature that makes it possible to freeze a running container (i.e. pause all its processes) and dump its complete in-kernel state into a file on disk. Such a dump file contains everything about processes inside a container: their memory, opened files, network connections, states etc. Then, a running container can be restored from the dump file and continue to run normally. The concept is somewhat similar to suspend-to-disk, only for a single container and much faster.

A container can be restored from a dump file on a different physical server, opening the door for live migration.

Live migration is an ability to move a running container from one physical server to another without a shutdown or service interruption. Network connections are migrated as well, so from a user's point of view it looks like some delay in response. OpenVZ live migration does not require any special hardware, disk or networking setup. It is implemented in the following way:

If container is residing on a shared storage (like NFS or SAN) there is no need to copy its files, one just checkpoints the container on one system and restores it on another.

Network connections are fully preserved and migrated. Upon finishing migration, destination server sends an ARP announce telling that container IP address now lives on a new MAC. While the container is frozen, all the incoming packets for it are dropped. In case of TCP, such packets will be retransmitted by the sending side, while in case of UDP packets are supposed to be lost sometimes. 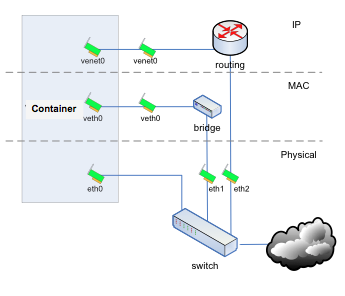 Each container has their own network stack. This includes network device(s), routing table, firewall rules (iptables), network caches, hash tables, etc. From the perspective of container owner it looks like a standalone Linux box.

This mode works in Layer 3 (network layer) of w:OSI model. That means that a container have a MAC-less network device (called venet) with one end in container and another end in the host system. Host system then acts as a router. Each IP packet is traversing both host and container's IP stack.

The major features of this setup are:

This mode works in OSI Layer 2 (data link layer). For container, a Virtual Ethernet (veth) device is used. This device can be thought of as a pipe with two ends -- one end in the host system and another end in a CT, so if a packet goes to one end it will come out from the other end. The host system acts as a bridge, so veth is usually bridged together with eth0 or similar interface.

The major features of this setup are:

Real network device in a container[edit]

From the point of view of a container owner, it looks and feels like a real system. Nevertheless, it is important to understand what are container limitations:

Containers mass-management is easy with some shell scripting and commands like exec and enter.

For example, to add a user jack to all running containers the following command can be used: